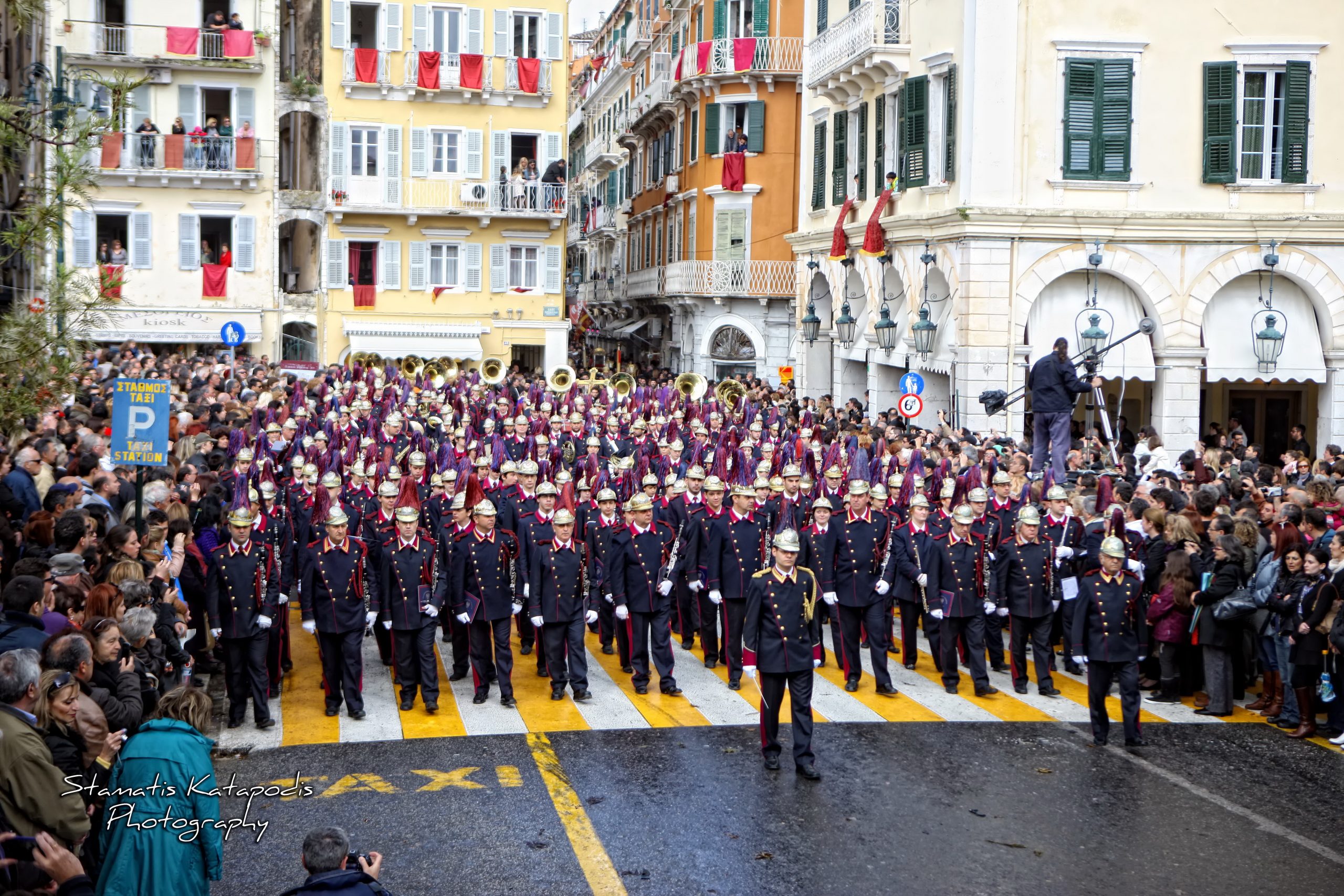 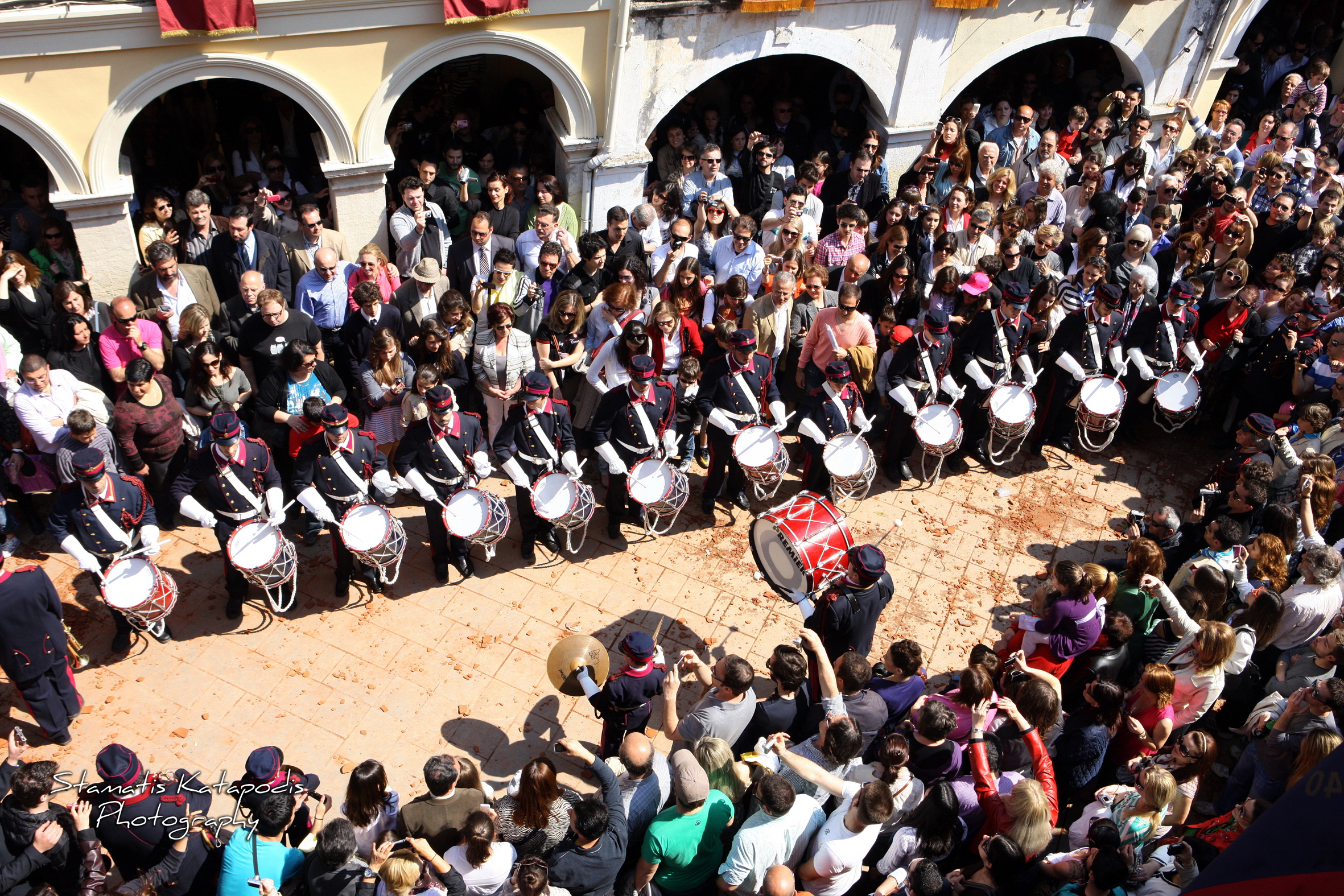 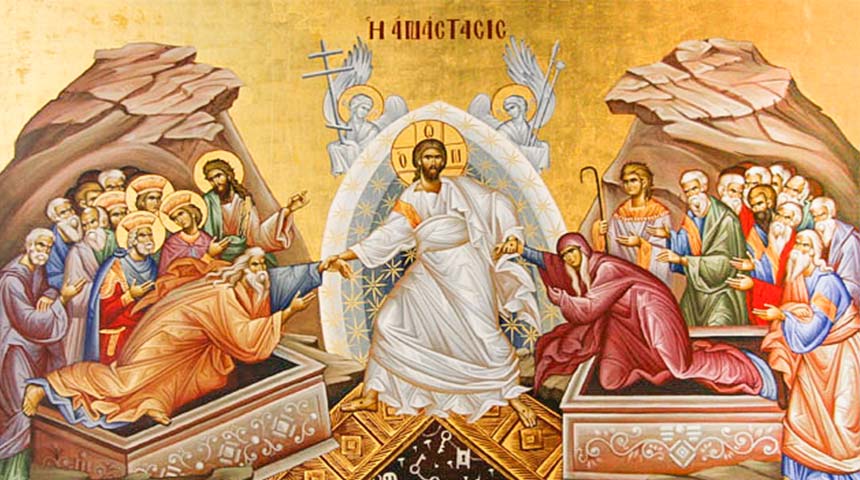 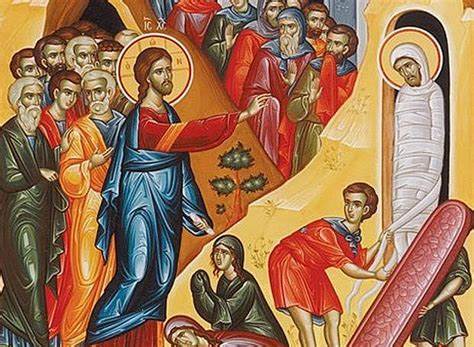 06:00
Re-enactment of the earthquake that followed the Lord’s resurrection at the Church of the Virgin Mary Phaneromene (Our Lady of Mainlanders), as described by the Evangelists.
09:00
Procession of the Holy Relic of St Spyridon and of the Sepulchre of the same church. That is the oldest procession of the saint’s relic in Corfu Town, in remembrance of the island’s release from food privation, probably in the year 1553. According to a very old tradition, the procession includes the church’s Sepulchre, as in the morning of the Great Holy Saturday the mourning of Good Friday still continues. It must be noted that the saint’s holy relic holds the position of Exarch in the procession, i.e. is carried before the Sepulchre, following the Byzantine order of rites, especially the Constantinopolitan one.
The marching bands of the three philharmonics of the town take part in the procession. They play an arrangement of the funeral march from Franco Faccio’s opera Amleto (the Corfu Philharmonic Society); the funeral march Calde Lacrimae by Vincenzo de Michelis (the “Mantzaros” Philharmonic Society); and an arrangement of Ludwig van Beethoven’s Marcia Funebre, the second movement of his Third Symphony (Eroica) (the “Kapodistrias” Philharmonic Association).
After the procession, the Holy Relic of St Spyridon is placed by the door of the church in worship for three days. This is also a very old tradition, probably rooted in Constantinople, when the saint’s relic was still retained at the Church of the Holy Apostles there.

11:00
Following the end of the religious procession, the Ressurection Vespers are sung at the Metropolis Church. When the Metropolitan reaches the line: “Arise, O God, judge the earth” (Psalm 82), all church bells in town ring in joy. Then inhabitants start throwing and breaking old clay utensils from their windows and balconies.
This is the custom of the so-called “First Resurrection” and has very old roots. It has been conjectured that this breaking symbolizes the victory of life over death. Corfiots themselves apply a Christian meaning to the custom; their comprehension of the Lord’s Resurrection chorus: “Thou shalt dash them in pieces like a potters vessel” (Psalm 2:9).
11:01
At Pinia, in the old town’s commercial centre, the old custom of the Mastela (or Barrel) has been revived in recent years. A barrel is filled with water and decorated with myrtles and coloured ribbons. Passers-by drop in coins and each makes a wish. After church bells peal for the “First Resurrection” the first person to dive into the barrel takes all coins and is subsequently drenched in water. Organized by OKE.
21:00
Service of the Easter Vigil at the Catholic Cathedral (the Duomo) with church organ and polyphonic chorus, officiated by the Most Revd Archbishop Ioannis Spiteris. The service concludes at 11 p.m.
22:00
Reception of the Holy Light, lit at the Church of the Holy Sepulchre of Jerusalem, takes place at Pentofananaro (near Liston) in the presence of the local authorities. The Holy Light is transported to the Church of St Paraskeve, where the Lord’s Resurrection service begins, officiated by the Most Revd Metropolitan Nektarios. In recent years it has emerged as custom for the Catholic Archbishop to receive the Holy Light from the Orthodox Christian Metropolitan in a brief ceremony at Porta Remunda,  during the procession to the Church of St Paraskeve.
23.00
Service of the Resurrection Vigil at the Church of St Paraskeve, near the Upper Square.
23:40
Assembly at the Upper Square Rotunda for the Resurrection ceremony, officiated by the Most Revd Metropolitan Nektarios of Corfu. The hymn “Christ is risen from the dead, trampling upon Death by death” is sung. The marching bands of the town’s three philharmonic orchestras play together the march “Graeci” in a joyful atmosphere.
In the following churches a Resurrection Mass is conducted during the night: All Saints, Our Lady of Mainlanders, SS Iason and Sosipater, Three Martyred Saints, Assumption of the Virgin at Mamaloi, SS Constantine and Helen; All Saints at Gouvia and at the monasteries of Platytera, St Euphemia, Virgin Mary Kassopitra, and the Saints Theodore. 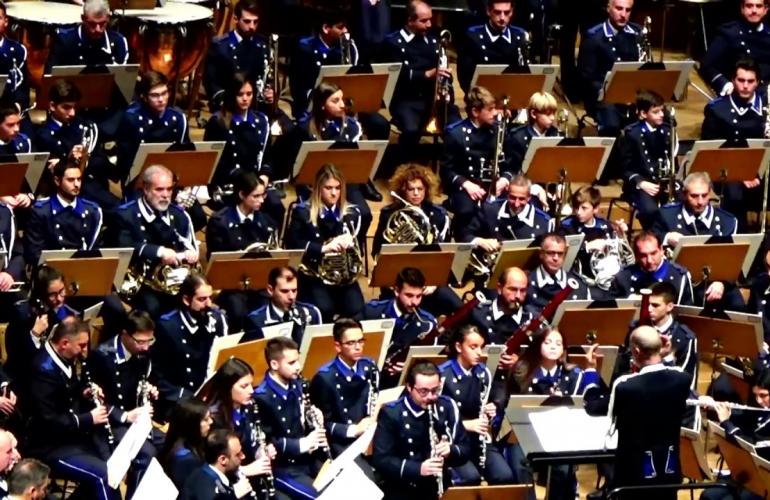 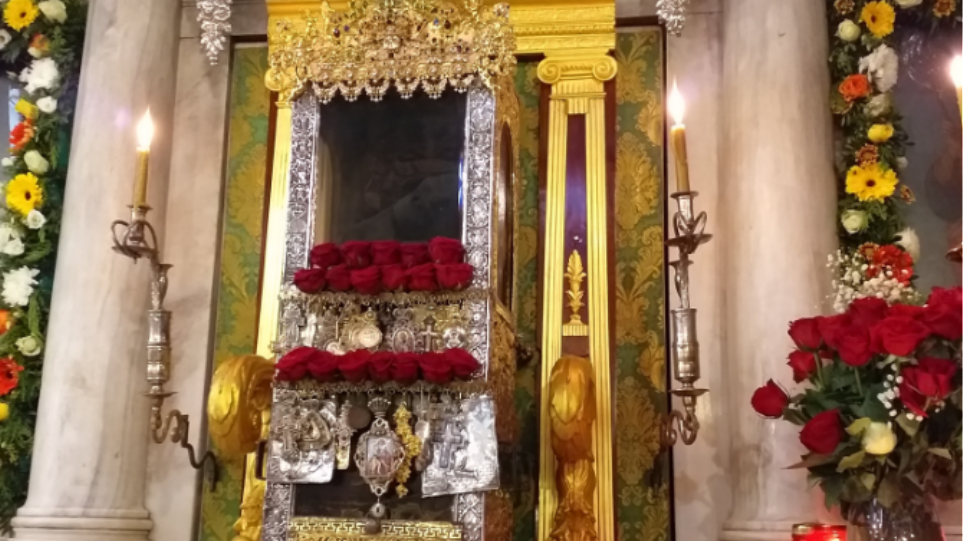 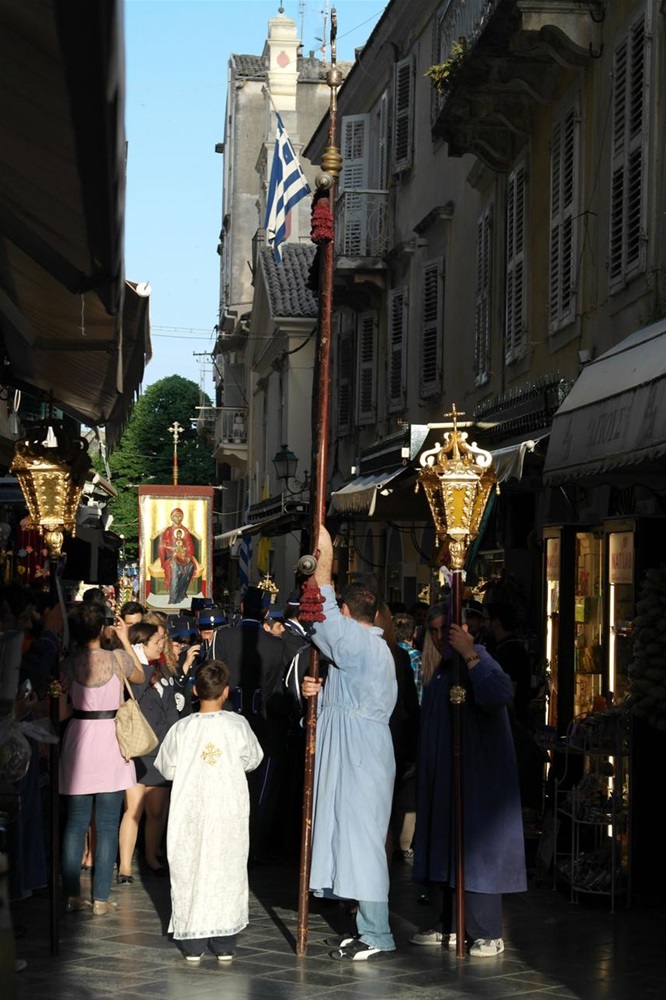 Easter Sunday
09:00-11:00  Most churches on the island hold the Resurrection Mass in the morning,..
Read more 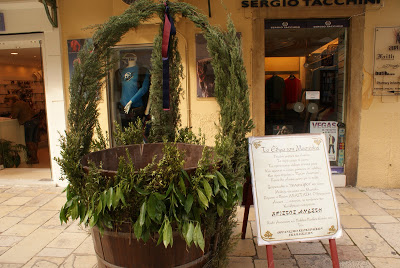 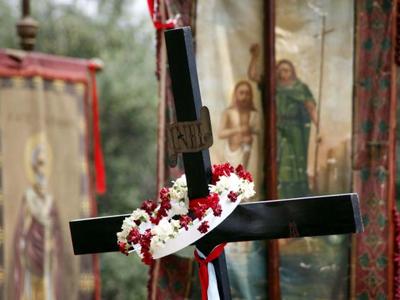 Holy Friday
All churches set forth the procession of their flower-covered Holy Sepulchres (i.e...
Read more 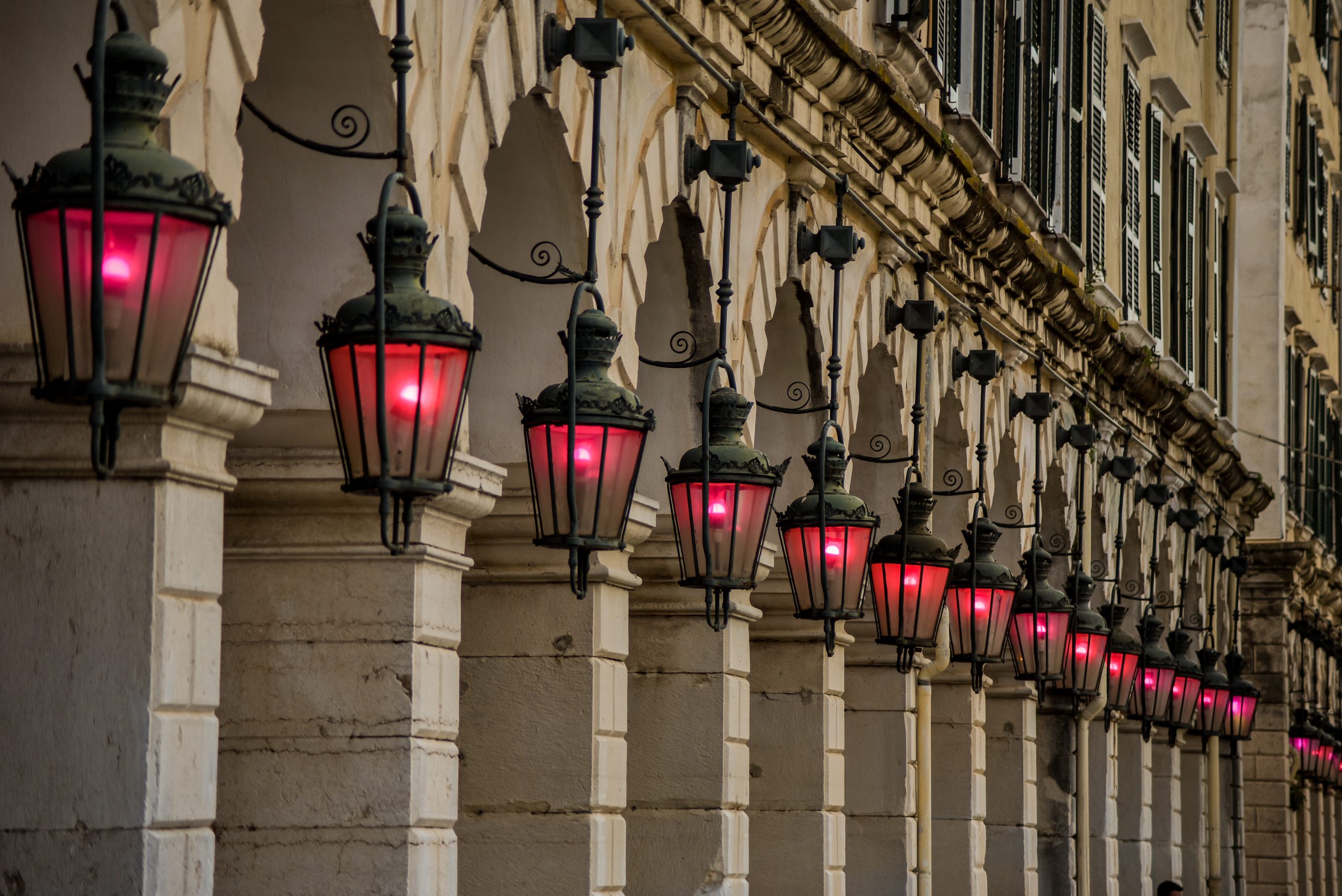 Easter in Corfu
Explore more from the same category